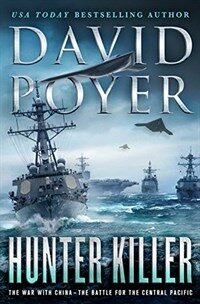 Hunter Killer: The War with China - The Battle for the Central Pacific (Hardcover)

World War with China explodes in Hunter Killer, David Poyer's dramatic new thriller. The United States stands nearly alone in its determination to fight, rather than give into the expansionist demands of the aggressive new “People’s Empire.” The naval and air forces of the Associated Powers ? China, Pakistan, Iran, and North Korea ? have used advanced technology and tactical nuclear weapons to devastate America's fleet in the Pacific, while its massive army forced humiliating surrenders on Japan, Taiwan, the Philippines, and other crucial allies.

Admiral Dan Lenson, commanding a combined US?South Korean naval force, and Commander Cheryl Staurulakis of USS Savo Island fight to turn the tide and prepare for an Allied counteroffensive. Meanwhile, SEAL operator Teddy Oberg escapes from a hellish POW camp and heads west through desolate mountains toward what he hopes will be freedom. Hector Ramos, an unwilling recruit, learns the Marine Corps has an ethos all its own. And in Washington, DC, Dan’s wife Blair Titus helps formulate America's political response to overwhelming setbacks in the Pacific and at on the home front.

Filled with dramatic battle scenes, from ship, submarine, and air warfare to desperate hand-to-hand Marine Corps combat, and informed by the author's own background as a Navy captain and defense analyst, Hunter Killer is a powerful, all-too-believable novel about how the next world war might unfold.