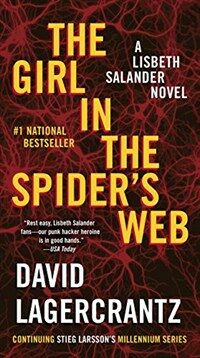 The Girl in the Spider's Web (Mass Market Paperback, Reprint)

One of the Best Books of the Year
NPR * USA Today * O, The Oprah Magazine * Esquire
?
A genius hacker who has always been an outsider. A journalist with a penchant for danger. She is Lisbeth Salander, the girl with the dragon tattoo. He is Mikael Blomkvist, crusading editor of Millennium. One night, Blomkvist receives a call from a source who claims to have been given information vital to the United States by a young female hacker. Blomkvist, always on the lookout for a story, reaches out to Salander for help. She, as usual, has plans of her own. Together they are drawn into a ruthless underworld of spies, cybercriminals, and government operatives?some willing to kill to protect their secrets.