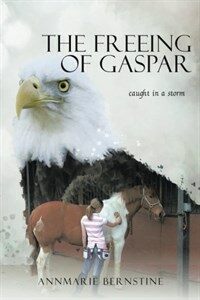 The Freeing of Gaspar: Caught in a Storm (Paperback)

This is a story about good verses evil. A woman a bee-keeper is also a witch. Her quest for power is threatening a family of seven.
Once she discovers that trapping a family member gives her more strength , she will stop at nothing to trap other members of this family.
The first member of the family to be trapped is the father. After several months of being trapped by this evil witch , he finally is set free .
He has been set free accidently by a very special young girl.
The second member of the family of seven to be trapped by the evil witch is the daughter of the family.
Her father seeks help from the very special young girl , who set him free. But the young girls father will not allow her to help.
So he leaves and goes back to where his daughter is trapped . If he can not free her at least he can be near her.
Much to his surprise , the young girl and her father show up at his door, one day. They have come to help him free his daughter. He already has a plan in place to free his daughter. But it will not work without this special young girl.
So when this special young girl and her father show up , he is thrilled. The girl is there only two days when she is able to free the mans daughter. The fathers and the daughters spend time together, celebrating freedom.
It is not long after the very special young girl and her father leave , that the evil witch is stalking another member of the family.
This takes the freed father and daughter on a train ride that is grueling to say the least. They end up in the Canadian Rocky Mountains. Will this evil witch get to their family member before they do ?