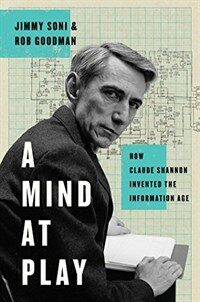 A Mind at Play: How Claude Shannon Invented the Information Age (Hardcover)

The fascinating life and times of one of the foremost intellects of the twentieth century: Claude Shannon?the neglected architect of the information age whose insights stand behind every computer built, email sent, video streamed, and webpage loaded.

Claude Shannon was a tinkerer, a playful wunderkind, a groundbreaking polymath, and a digital pioneer whose insights made the Information Age possible. He constructed fire-breathing trumpets and customized unicycles, outfoxed Vegas casinos, and built juggling robots, but he also wrote the seminal text of the digital revolution. That work, which has been called “the Magna Carta of the Information Age,” allowed scientists to measure and manipulate information as objectively as any physical object. It showed them how they might transmit it flawlessly, a result considered hopelessly utopian up until the moment that Shannon proved it was not. His work anticipated by decades the world in today?and gave mathematicians and engineers the tools to bring that world to pass.

Now, in this elegantly written and exhaustively researched biography, Jimmy Soni and Rob Goodman bring Claude Shannon’s story to life. It’s the story of a small-town boy from Michigan whose career stretched from the age of room-sized computers powered by gears and string to the age of the Apple desktop. It’s the story of the origins of information in the tunnels of MIT and the “idea factory” of Bell Labs, in the “scientists’ war” with Nazi Germany, and in the work of Shannon’s collaborators and rivals, thinkers like Alan Turing, John von Neumann, Vannevar Bush, and Norbert Wiener. And it’s the story of Shannon’s life as an often reclusive, always playful genius. With access to Shannon’s family and friends, A Mind At Play explores the life and times of this singular innovator and creative genius.