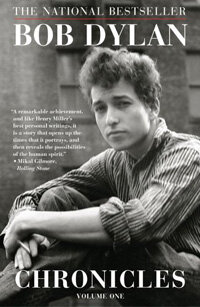 One would not anticipate a conventional memoir from Bob Dylan--indeed, one would not have foreseen an autobiography at all from the pen of the notoriously private legend. What Chronicles: Volume 1 delivers is an odd but ultimately illuminating memoir that is as impulsive, eccentric, and inspired as Dylan's greatest music.

Eschewing chronology and skipping over most of the "highlights" that his many biographers have assigned him, Dylan drifts and rambles through his tale, amplifying a series of major and minor epiphanies. If you're interested in a behind-the-scenes look at his encounters with the Beatles, look elsewhere. Dylan describes the sensation of hearing the group's "Do You Want to Know a Secret" on the radio, but devotes far more ink to a Louisiana shopkeeper named Sun Pie, who tells him, "I think all the good in the world might already been done" and sells him a World's Greatest Grandpa bumper sticker. Dylan certainly sticks to his own agenda--a newspaper article about journeymen heavyweights Jerry Quarry and Jimmy Ellis and soul singer Joe Tex's appearance on The Tonight Show inspire heartfelt musings, and yet the 1963 assassination of John Kennedy prompts nary a word from the era's greatest protest singer.

For all the small revelations (it turns out he's been a big fan of Barry Goldwater, Mickey Rourke, and Ice-T), there are eye-opening disclosures, including his confession that a large portion of his recorded output was designed to alienate his audience and free him from the burden of being a "the voice of a generation."

Off the beaten path as it is, Chronicles is nevertheless an astonishing achievement. As revelatory in its own way as Blonde on Blonde or Highway 61 Revisited, it provides ephemeral insights into the mind one of the most significant artistic voices of the 20th century while creating a completely new set of mysteries. --Steven Stolder