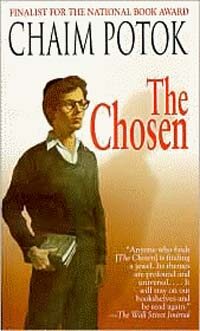 Few stories offer more warmth, wisdom, or generosity than this tale of two boys, their fathers, their friendship, and the chaotic times in which they live. Though on the surface it explores religious faith--the intellectually committed as well as the passionately observant--the struggles addressed in The Chosen are familiar to families of all faiths and in all nations.
In 1940s Brooklyn, New York, an accident throws Reuven Malther and Danny Saunders together. Despite their differences (Reuven is a Modern Orthodox Jew with an intellectual, Zionist father; Danny is the brilliant son and rightful heir to a Hasidic rebbe), the young men form a deep, if unlikely, friendship. Together they negotiate adolescence, family conflicts, the crisis of faith engendered when Holocaust stories begin to emerge in the U.S., loss, love, and the journey to adulthood. The intellectual and spiritual clashes between fathers, between each son and his own father, and between the two young men, provide a unique backdrop for this exploration of fathers, sons, faith, loyalty, and, ultimately, the power of love. (This is not a conventional children's book, although it will move any wise child age 12 or older, and often appears on summer reading lists for high school students.)

"Anyone who finds it is finding a jewel. Its themes are profound and universal." -- THE WALL STREET JOURNAL

It is the now-classic story of two fathers and two sons and the pressures on all of them to pursue the religion they share in the way that is best suited to each. And as the boys grow into young men, they discover in the other a lost spiritual brother, and a link to an unexplored world that neither had ever considered before. In effect, they exchange places, and find the peace that neither will ever retreat from again....