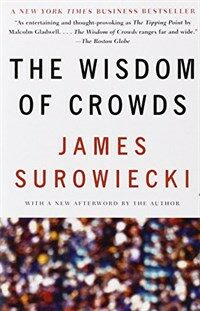 The Wisdom of Crowds (Paperback)

With boundless erudition and in delightfully clear prose, Surowiecki ranges across fields as diverse as popular culture, psychology, ant biology, behavioral economics, artificial intelligence, military history, and politics to show how this simple idea offers important lessons for how we live our lives, select our leaders, run our companies, and think about our world.


If, years hence, people remember anything about the TV game show Who Wants to Be a Millionaire?, they will probably remember the contestants' panicked phone calls to friends and relatives. Or they may have a faint memory of that short-lived moment when Regis Philbin became a fashion icon for his willingness to wear a dark blue tie with a dark blue shirt. What people probably won't remember is that every week Who Wants to Be a Millionaire? pitted group intelligence against individual intelligence, and that every week, group intelligence won.

Who Wants to Be a Millionaire? was a simple show in terms of structure: a contestant was asked multiple-choice questions, which got successively more difficult, and if she answered fifteen questions in a row correctly, she walked away with $1 million. The show's gimmick was that if a contestant got stumped by a question, she could pursue three avenues of assistance. First, she could have two of the four multiple-choice answers removed (so she'd have at least a fifty-fifty shot at the right response). Second, she could place a call to a friend or relative, a person whom, before the show, she had singled out as one of the smartest people she knew, and ask him or her for the answer. And third, she could poll the studio audience, which would immediately cast its votes by computer. Everything we think we know about intelligence suggests that the smart individual would offer the most help. And, in fact, the "experts" did okay, offering the right answer--under pressure--almost 65 percent of the time. But they paled in comparison to the audiences. Those random crowds of people with nothing better to do on a weekday afternoon than sit in a TV studio picked the right answer 91 percent of the time.

Now, the results of Who Wants to Be a Millionaire? would never stand up to scientific scrutiny. We don't know how smart the experts were, so we don't know how impressive outperforming them was. And since the experts and the audiences didn't always answer the same questions, it's possible, though not likely, that the audiences were asked easier questions. Even so, it's hard to resist the thought that the success of the Millionaire audience was a modern example of the same phenomenon that Francis Galton caught a glimpse of a century ago.

As it happens, the possibilities of group intelligence, at least when it came to judging questions of fact, were demonstrated by a host of experiments conducted by American sociologists and psychologists between 1920 and the mid-1950s, the heyday of research into group dynamics. Although in general, as we'll see, the bigger the crowd the better, the groups in most of these early

experiments--which for some reason remained relatively unknown outside of academia--were relatively small. Yet they nonetheless performed very well. The Columbia sociologist Hazel Knight kicked things off with a series of studies in the early 1920s, the first of which had the virtue of simplicity. In that study Knight asked the students in her class to estimate the room's temperature, and then took a simple average of the estimates. The group guessed 72.4 degrees, while the actual temperature was 72 degrees. This was not, to be sure, the most auspicious beginning, since classroom temperatures are so stable that it's hard to imagine a class's estimate being too far off base. But in the years that followed, far more convincing evidence emerged, as students and soldiers across America were subjected to a barrage of puzzles, intelligence tests, and word games. The sociologist Kate H. Gordon asked two hundred students to rank items by weight, and found that the group's "estimate" was 94 percent accurate, which was better than all but five of the individual guesses. In another experiment students were asked to look at ten piles of buckshot--each a slightly different size than the