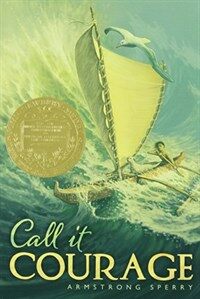 Mafatu's name means "Stout Heart," but his people call him a coward. Ever since the sea took his mother's life and spared his own, he has lived with deep fear. And even though his father is the Great Chief of Hikueru--an island whose seafaring people worship courage--he is terrified, and consequently, he is severely scorned.

By the time he is fifteen years old, Mafatu can bear it no longer. He must conquer his fear alone. . . even if it means certain death.

This classic tale of a young boy's hidden strength has been a favorite of readers of all ages since its 1940 publication--now this exclusive audio preserves its original poignancy and splendor, and brings Mafatu to life for future generations of listeners.

Highlights of Lou Diamond Phillips's film credits include Courage Under Fire, Young Guns II, Stand and Deliver, and La Bamba. An accomplished stage actor, he starred in the critically acclaimed Broadway revival of The King and I.