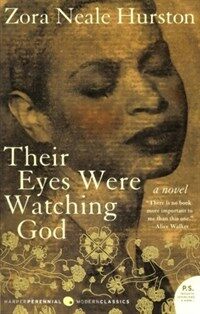 Their Eyes Were Watching God (Paperback)

------------Amazon.com-------------
At the height of the Harlem Renaissance during the 1930s, Zora Neale Hurston was the preeminent black woman writer in the United States. She was a sometime-collaborator with Langston Hughes and a fierce rival of Richard Wright. Her stories appeared in major magazines, she consulted on Hollywood screenplays, and she penned four novels, an autobiography, countless essays, and two books on black mythology. Yet by the late 1950s, Hurston was living in obscurity, working as a maid in a Florida hotel. She died in 1960 in a Welfare home, was buried in an unmarked grave, and quickly faded from literary consciousness until 1975 when Alice Walker almost single-handedly revived interest in her work.

Of Hurston's fiction, Their Eyes Were Watching God is arguably the best-known and perhaps the most controversial. The novel follows the fortunes of Janie Crawford, a woman living in the black town of Eaton, Florida. Hurston sets up her characters and her locale in the first chapter, which, along with the last, acts as a framing device for the story of Janie's life. Unlike Wright and Ralph Ellison, Hurston does not write explicitly about black people in the context of a white world--a fact that earned her scathing criticism from the social realists--but she doesn't ignore the impact of black-white relations either:

It was the time for sitting on porches beside the road. It was the time to hear things and talk. These sitters had been tongueless, earless, eyeless conveniences all day long. Mules and other brutes had occupied their skins. But now, the sun and the bossman were gone, so the skins felt powerful and human. They became lords of sounds and lesser things. They passed nations through their mouths. They sat in judgment.

One person the citizens of Eaton are inclined to judge is Janie Crawford, who has married three men and been tried for the murder of one of them. Janie feels no compulsion to justify herself to the town, but she does explain herself to her friend, Phoeby, with the implicit understanding that Phoeby can "tell 'em what Ah say if you wants to. Dat's just de same as me 'cause mah tongue is in mah friend's mouf."

Hurston's use of dialect enraged other African American writers such as Wright, who accused her of pandering to white readers by giving them the black stereotypes they expected. Decades later, however, outrage has been replaced by admiration for her depictions of black life, and especially the lives of black women. In Their Eyes Were Watching God Zora Neale Hurston breathes humanity into both her men and women, and allows them to speak in their own voices. --Alix Wilber


One of the most important works of twentieth-century American literature, Zora Neale Hurston's beloved 1937 classic, Their Eyes Were Watching God, is an enduring Southern love story sparkling with wit, beauty, and heartfelt wisdom. Told in the captivating voice of a woman who refuses to live in sorrow, bitterness, fear, or foolish romantic dreams, it is the story of fair-skinned, fiercely independent Janie Crawford, and her evolving selfhood through three marriages and a life marked by poverty, trials, and purpose. A true literary wonder, Hurston's masterwork remains as relevant and affecting today as when it was first published -- perhaps the most widely read and highly regarded novel in the entire canon of African American literature.

------------Download Description-------------
"E-BOOK EXTRA: Janie's Great Journey: A Reading Group Guide; PLUS: The Comphrehensive Edition: This special e-book is the only edition to include all three essays by Edwidge Danticat, Mary Helen Washington, and Henry Louis Gates.

Fair and long-legged, independent and articulate, Janie Crawford sets out to be her own person -- no mean feat for a Black woman in the '30s. Zora Neale Hurston's classic 1937 novel follows Janie's quest for identity -- a journey during which she learns what love is, experiences life's joys and sorrows, and comes home to herself in peace. "There is no book more important to me than this one." --Alice Walker "Their Eyes belongs in the same category with [the works of] William Faulkner, F. Scott Fitzgerald, and Ernest Hemingway, that of enduring American literature." --Saturday Review

Fair and long-legged, independent and articulate, Janie Crawford sets out to be her own person -- no mean feat for a black woman in the '30s. Janie's quest for identity takes her through three marriages and into a journey back to her roots."