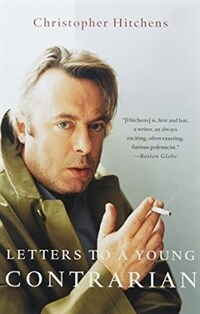 Letters to a Young Contrarian (Paperback)

In the book that he was born to write, provocateur and best-selling author Christopher Hitchens inspires future generations of radicals, gadflies, mavericks, rebels, angry young (wo)men, and dissidents. Who better to speak to that person who finds him or herself in a contrarian position than Hitchens, who has made a career of disagreeing in profound and entertaining ways.This book explores the entire range of "contrary positions"-from noble dissident to gratuitous pain in the butt. In an age of overly polite debate bending over backward to reach a happy consensus within an increasingly centrist political dialogue, Hitchens pointedly pitches himself in contrast. He bemoans the loss of the skills of dialectical thinking evident in contemporary society. He understands the importance of disagreement-to personal integrity, to informed discussion, to true progress-heck, to democracy itself. Epigrammatic, spunky, witty, in your face, timeless and timely, this book is everything you would expect from a mentoring contrarian.

From bestselling author and provocateur Christopher Hitchens, the classic guide to the art of principled dissent and disagreement In Letters to a Young Contrarian, bestselling author and world-class provocateur Christopher Hitchens inspires the radicals, gadflies, mavericks, rebels, and angry young (wo)men of tomorrow. Exploring the entire range of "contrary positions"--from noble dissident to gratuitous nag--Hitchens introduces the next generation to the minds and the misfits who influenced him, invoking such mentors as Emile Zola, Rosa Parks, and George Orwell. As is his trademark, Hitchens pointedly pitches himself in contrast to stagnant attitudes across the ideological spectrum. No other writer has matched Hitchens's understanding of the importance of disagreement--to personal integrity, to informed discussion, to true progress, to democracy itself.