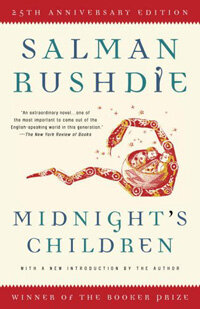 ------------Amazon.com-------------
Anyone who has spent time in the developing world will know that one of Bombay's claims to fame is the enormous film industry that churns out hundreds of musical fantasies each year. The other, of course, is native son Salman Rushdie--less prolific, perhaps than Bollywood, but in his own way just as fantastical. Though Rushdie's novels lack the requisite six musical numbers that punctuate every Bombay talkie, they often share basic plot points with their cinematic counterparts. Take, for example, his 1980 Booker Prize-winning Midnight's Children: two children born at the stroke of midnight on August 15, 1947--the moment at which India became an independent nation--are switched in the hospital. The infant scion of a wealthy Muslim family is sent to be raised in a Hindu tenement, while the legitimate heir to such squalor ends up establishing squatters' rights to his unlucky hospital mate's luxurious bassinet. Switched babies are standard fare for a Hindi film, and one can't help but feel that Rushdie's world-view--and certainly his sense of the fantastical--has been shaped by the films of his childhood. But whereas the movies, while entertaining, are markedly mediocre, Midnight's Children is a masterpiece, brilliant written, wildly unpredictable, hilarious and heartbreaking in equal measure.

Rushdie's narrator, Saleem Sinai, is the Hindu child raised by wealthy Muslims. Near the beginning of the novel, he informs us that he is falling apart--literally:

I mean quite simply that I have begun to crack all over like an old jug--that my poor body, singular, unlovely, buffeted by too much history, subjected to drainage above and drainage below, mutilated by doors, brained by spittoons, has started coming apart at the seams. In short, I am literally disintegrating, slowly for the moment, although there are signs of an acceleration.

In light of this unfortunate physical degeneration, Saleem has decided to write his life story, and, incidentally, that of India's, before he crumbles into "(approximately) six hundred and thirty million particles of anonymous, and necessarily oblivious, dust." It seems that within one hour of midnight on India's independence day, 1,001 children were born. All of those children were endowed with special powers: some can travel through time, for example; one can change gender. Saleem's gift is telepathy, and it is via this power that he discovers the truth of his birth: that he is, in fact, the product of the illicit coupling of an Indian mother and an English father, and has usurped another's place. His gift also reveals the identities of all the other children and the fact that it is in his power to gather them for a "midnight parliament" to save the nation. To do so, however, would lay him open to that other child, christened Shiva, who has grown up to be a brutish killer. Saleem's dilemma plays out against the backdrop of the first years of independence: the partition of India and Pakistan, the ascendancy of "The Widow" Indira Gandhi, war, and, eventually, the imposition of martial law.

We've seen this mix of magical thinking and political reality before in the works of Gunter Grass and Gabriel Garcia Marquez. What sets Rushdie apart is his mad prose pyrotechnics, the exuberant acrobatics of rhyme and alliteration, pun, wordplay, proper and "Babu" English chasing each other across the page in a dizzying, exhilarating cataract of words. Rushdie can be laugh-out-loud funny, but make no mistake--this is an angry book, and its author's outrage lends his language wings. Midnight's Children is Salman Rushdie's irate, affectionate love song to his native land--not so different from a Bombay talkie, after all. --Alix Wilber

------------Book Description-------------
Saleem Sinai is born at the stroke of midnight on August 15, 1947, the very moment of India’s independence. Greeted by fireworks displays, cheering crowds, and Prime Minister Nehru himself, Saleem grows up to learn the ominous consequences of this coincidence. His every act is mirrored and magnified in events that sway the course of national affairs; his health and well-being are inextricably bound to those of his nation; his life is inseparable, at times indistinguishable, from the history of his country. Perhaps most remarkable are the telepathic powers linking him with India’s 1,000 other “midnight’s children,” all born in that initial hour and endowed with magical gifts.
This novel is at once a fascinating family saga and an astonishing evocation of a vast land and its people–a brilliant incarnation of the universal human comedy. Twenty-five years after its publication, Midnight’s Children stands apart as both an epochal work of fiction and a brilliant performance by one of the great literary voices of our time.