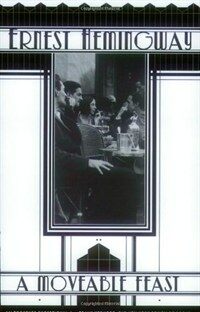 ------------Amazon.com-------------
In the preface to A Moveable Feast, Hemingway remarks casually that "if the reader prefers, this book may be regarded as fiction"--and, indeed, fact or fiction, it doesn't matter, for his slim memoir of Paris in the 1920s is as enchanting as anything made up and has become the stuff of legend. Paris in the '20s! Hemingway and his first wife, Hadley, lived happily on $5 a day and still had money for drinks at the Closerie des Lilas, skiing in the Alps, and fishing trips to Spain. On every corner and at every cafe table, there were the most extraordinary people living wonderful lives and telling fantastic stories. Gertrude Stein invited Hemingway to come every afternoon and sip "fragrant, colorless alcohols" and chat admid her great pictures. He taught Ezra Pound how to box, gossiped with James Joyce, caroused with the fatally insecure Scott Fitzgerald (the acid portraits of him and his wife, Zelda, are notorious). Meanwhile, Hemingway invented a new way of writing based on this simple premise: "All you have to do is write one true sentence. Write the truest sentence you know."

Hemingway beautifully captures the fragile magic of a special time and place, and he manages to be nostalgic without hitting any false notes of sentimentality. "This is how Paris was in the early days when we were very poor and very happy," he concludes. Originally published in 1964, three years after his suicide, A Moveable Feast was the first of his posthumous books and remains the best. --David Laskin

------------Book Description-------------
Published posthumously in 1964, A Moveable Feast remains one of Ernest Hemingway's most beloved works. It is his classic memoir of Paris in the 1920s, filled with irreverent portraits of other expatriate luminaries such as F. Scott Fitzgerald and Gertrude Stein; tender memories of his first wife, Hadley; and insightful recollections of his own early experiments with his craft. It is a literary feast, brilliantly evoking the exuberant mood of Paris after World War I and the youthful spirit, unbridled creativity, and unquenchable enthusiasm that Hemingway himself epitomized.

------------Download Description-------------
"You belong to me and all Paris belongs to me and I belong to this notebook and this pencil." Begun in the autumn of 1957 and published posthumously in 1964, Ernest Hemingway's A Moveable Feast captures what it meant to be young and poor and writing in Paris during the 1920s. A correspondent for the Toronto Star, Hemingway arrived in Paris in 1921, three years after the trauma of the Great War and at the beginning of the transformation of Europe's cultural landscape: Braque and Picasso were experimenting with cubist forms; James Joyce, long living in self-imposed exile from his native Dublin, had just completed Ulysses; Gertude Stein held court at 27 rue de Fleurus, and deemed young Ernest a member of rue generation perdue; and T. S. Eliot was a bank clerk in London. It was during these years that the as-of-yet unpublished young writer gathered the material for his first novel, The Sun Also Rises, and the subsequent masterpieces that followed. Among these small, reflective sketches are unforgettable encounters with the members of Hemingway's slightly rag-tag circle of artists and writers, some also fated to achieve fame and glory, others to fall into obscurity. Here, too, is an evocation of the Paris that Hemingway knew as a young man - a map drawn in his distinct prose of the streets and cafes and bookshops that comprised the city in which he, as a young writer, sometimes struggling against the cold and hunger of near poverty, honed the skills of his craft. A Moveable Feast is at once an elegy to the remarkable group of expatriates that gathered in Paris during the twenties and a testament to the risks and rewards of the writerly life.