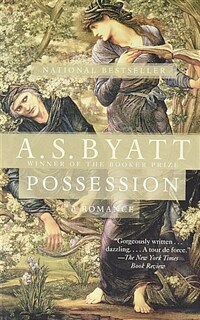 1. What is the significance of the novel's title? Do you think it has more than one meaning? What does the concept of 'possession' mean to the novel's various characters, both modern and Victorian? How can possession be seen as the theme of the book? 2. Ash is nicknamed 'the Great Ventriloquist' but this sobriquet could as easily be applied to Byatt herself. Why does Byatt use poetry to give away so many clues to the story? Are the poems a necessary and integral part of the novel or would it have worked just as well without them? Do you find that the poems in the novel succeed in their own right as poetry? 3. All the characters' names are carefully chosen and layered with meaning. What is the significance behind the following names: Roland Michell, Beatrice Nest, Sir George Bailey, Randolph Ash, Maud Bailey, Christabel LaMotte, Fergus Wolff? (Clues to the last three may be found in the poetry by Tennyson, Yeats, and Coleridge cited below.) Do any other names in the novel seem to you to have special meanings? How do the names help define, or confuse, the relationships between the characters? 4. The scholars in the novel see R. H. Ash as a specifically masculine, Christabel LaMotte as a specifically feminine, type of poet, just as Robert Browning and Christina Rossetti, the poets on whose work Ash's and LaMotte's are loosely based, were considered to be extreme examples of the masculine and feminine in literature. Do you feel that such a classification is valid? What is there about Ash's and LaMotte's diction and subject matter that fulfills our ideas of 'masculine' and 'feminine'? Do the poets themselves consciously enact masculine and feminine roles? Do you find that Christabel's poetry is presented as being secondary to Ash's? Or that the work of the two poets is complementary? 5. Ellen Ash wrote her journal as a 'defence against, and a bait for, the gathering of ghouls and vultures' [p. 501]. Mortimer Cropper is literally presented as a ghoul, robbing the poet's grave. Beatrice Nest, on the other hand, wishes to preserve Christabel's final letter to Randolph unread. What is the fine line, if any, between a ghoulish intrusion upon the privacy of the dead, and the legitimate claims of scholarship and history? As much as the scholars have discovered, one secret is kept from them at the end and revealed only to the reader. What is that secret and what difference does it make to Roland's future? 6. Freedom and autonomy are highly valued both by Christabel and Maud. What does autonomy mean to each of these characters? In Christabel's day, it was difficult for women to attain such autonomy; is it still difficult, in Maud's? What does autonomy mean to Roland? Why does mutual solitude and even celibacy assume a special importance in his relationship with Maud? 7. The moment of crisis in the poets' lives, 1859, was a significant year, as it saw the publication of Charles Darwin's Origin of Species . The theory of natural selection delivered a terrible blow to the Victorians' religious faith and created a climate of uncertainty: 'Doubt,' says Christabel, 'doubt is endemic to our life in this world at this time' [p. 182]. How does Byatt compare this spiritual crisis with that which has befallen Roland and Maud's generation, who are taught to believe that the 'self' is illusory [p. 459]? 8. The fluffy Beatrice Nest is scorned by the feminist scholars who crave access to Ellen Ash's journal. Yet in her way Beatrice is as much a victim of 'patriarchy' as any of the Victorian women they study. What is the double standard at work among these politically minded young people? Can Beatrice be seen as a 'superfluous woman,' like Blanche and Val? What, if anything, do these three women have in common? 9. Ash writes 'Swammerdam' with a particular reader, Christabel LaMotte, in mind. Is Christabel's influence on Ash evident in the poem, and if so, how and where? How, in the poem, does Ash address his society's preoccupation with science and religion? How does he address his and Christabel's conflicting religious ideas? How does Christabel herself present these ideas in Mélusine ? 10. Why is Christabel so affected by Gode's tale of the miller's daughter? What are its parallels with her own life? 11. The fairy Mélusine has, as Christabel points out, 'two aspects--an Unnatural Monster--and a most proud and loving and handy woman' [p. 191]. How does Christabel make Mélusine's situation a metaphor for that of the woman poet? Does Christabel herself successfully defy society's strictures against women artists, or does her awareness of the problem cripple her, either professionally or emotionally? At the end of her life she wonders whether she might have been a great poet, as she believes Ash was, if she had kept to her 'closed castle' [p. 545]. What do you think? 12. Roland and Maud believe they are taking part in a quest. This is a classic element of medieval and nineteenth-century Romance, of which they are well aware. Aside from the quest, what other elements of Romance can be found in Maud and Roland's story? In Christabel and Randolph's? What other genres are exploited in the novel? 13. When he returns to his flat at the end of the novel, Roland decides there is 'no reason why he should not go out into the garden' [p. 514]. What is the emotional significance of his finally entering the garden? Poems that will enrich your understanding of Possession Robert Browning, 'Childe Roland to the Dark Tower Came,' 'My Last Duchess,' 'Porphyria's Lover,' 'Caliban Upon Setebos,' 'Bishop Blougram's Apology,' 'Mr. Sludge, the 'Medium',' 'Andrea del Sarto,' and 'Fra Lippo Lippi'; Samuel Taylor Coleridge, 'Christabel'; Andrew Marvell, 'To His Coy Mistress,' 'The Garden'; Petrarch, Rime Sparse ; Christina Rossetti, Poetical Works ; Alfred, Lord Tennyson, 'Merlin and Vivien' from Idylls of the King , In Memoriam , 'Maud,' 'Mariana,' 'The Lady of Shallott'; W.B. Yeats, The Rose .