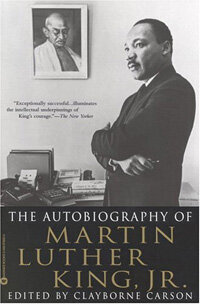 ------------Amazon.com-------------
Celebrated Stanford University historian Clayborne Carson is the director and editor of the Martin Luther King Papers Project; with thousands of King's essays, notes, letters, speeches, and sermons at his disposal, Carson has organized King's writings into a posthumous autobiography. In an early student essay, King prophetically penned: "We cannot have an enlightened democracy with one great group living in ignorance.... We cannot have a nation orderly and sound with one group so ground down and thwarted that it is almost forced into unsocial attitudes and crime." Such statements, made throughout King's career, are skillfully woven together into a coherent narrative of the quest for social justice. The autobiography delves, for example, into the philosophical training King received at Morehouse College, Crozer Theological Seminary, and Boston University, where he consolidated the teachings of Afro-American theologian Benjamin Mays with the philosophies of Locke, Rousseau, Gandhi, and Thoreau. Through King's voice, the reader intimately shares in his trials and triumphs, including the Montgomery Boycott, the 1963 "I Have a Dream Speech," the Selma March, and the 1964 Nobel Peace Prize. In one of his last speeches, King reminded his audience that "in the final analysis, God does not judge us by the separate incidents or the separate mistakes that we make, but by the total bent of our lives." Carson's skillful editing has created an original argument in King's favor that draws directly from the source, illuminating the circumstances of King's life without deifying his person. --Eugene Holley Jr.

------------Amazon.com Audiobook Review-------------
By weaving together an unprecedented amount of material, including Dr. King's books, articles, essays, personal letters, and unpublished manuscripts, Clayborne Carson (historian, documentarian, and director of the King Papers Project) has crafted an excellent production that represents the unique medium of audiobooks at its very best. With the effective and engaging narration of actor Levar Burton as a foundation, the tapes provide understanding and insight into this important religious and political leader's powerful convictions. Original music from the civil rights movement, plus rare recordings of Dr. King's moving speeches and sermons, help create an inspiring portrait of one of the most influential leaders of the 20th century. (Running time: 9 hours, 6 cassettes) --George Laney

------------Book Description-------------
Clayborne Carson has created a book that remarkably approximates a self-portrait of Martin Luther King Jr. Delving into all aspects of this mans life, the work covers his boyhood, his education, and his emergence as a leader. From his relationships with his wife and children, to his dealings with the important political figures of the era, this book defines the history of a genuine hero.

------------Download Description-------------
A professor of history and the noted author and editor of several books on the civil rights struggle, Dr. Clayborne Carson was selected by the estate of Dr. Martin Luther King, Jr., to edit and publish Dr. King's papers. Drawing upon an unprecedented archive of King's own words--including unpublished letters and diaries, as well as video footage and recordings--Dr. Carson creates an unforgettable self-portrait of Dr. King. In his own vivid, compassionate voice, here is Dr. Martin Luther King, Jr., as student, minister, husband, father, and world leader . . . as well as a rich, moving chronicle of a people and a nation in the face of powerful--and still resonating--change.