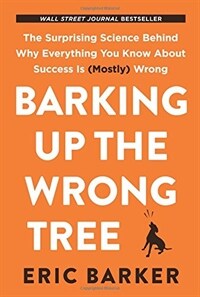 Barking Up the Wrong Tree: The Surprising Science Behind Why Everything You Know about Success Is (Mostly) Wrong (Hardcover)

Founder of the hugely popular blog Barking Up the Wrong Tree, Eric Barker looks at the surprising science behind what separates the extremely successful from the rest of us, and teaches us what we can do to be more like them?and why in some cases it’s good that we aren’t.

Much of what we’ve been told about the qualities that lead to achievement is logical, earnest . . . and downright wrong. Barking Up the Wrong Tree explodes the myths and looks at the science behind what separates the extremely successful from the rest of us. What it reveals is that success is less about being perfect in a particular quality than knowing what you’re best at and being properly aligned with your context. The thing that sets you apart, the habits you tried to banish, the things you were taunted for in school may grant you an unbeatable advantage given the proper context.

While we can’t all win Olympic Gold or Nobel Prizes, many of the methods that get people ahead are well within reach. The book will look at what works, what doesn’t, and share insights on how to best navigate the world when we’re unsure. It will also reveal:

Sometimes what produces success is raw talent, sometimes it’s the nice things mom told you to do and other times it’s the exact opposite. Barking Up the Wrong Tree separates the true from the false and rewrite the rules of success for everyone.