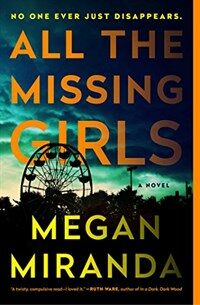 All the Missing Girls (Paperback)

A masterful psychological suspense debut about the disappearances of two young women - a decade apart - told in reverse. A "Hitchcockian" ride through twists and turns that will turn you inside out.

A NEW YORK TIMES BESTSELLER A New York Times Book Review "Editors' Choice" Entertainment Weekly - Thriller Round-Up The Wall Street Journal - 5 Killer Books for 2016 Hollywood Reporter - Hot Summer Books...16 Must Reads "This thriller's all of your fave page-turners (think: Luckiest Girl Alive, The Girl on the Train, Gone Girl) rolled into one." -TheSkimm "Both [Gillian] Flynn's and Miranda's main characters also reclaim the right of female characters to be more than victim or femme fatale... All the Missing Girls is set to become one of the best books of 2016." -Los Angeles Review of Books "Extremely interesting...a novel that will probably be called Hitchcockian." -The New York Times Book Review "Are you paying attention? You'll need to be; this thriller will test your brain with its reverse chronological structure, and it's a page-turner to boot." -Elle Like the spellbinding psychological suspense in The Girl on the Train and Luckiest Girl Alive, Megan Miranda's novel is a nail-biting, breathtaking story about the disappearances of two young women-a decade apart-told in reverse. It's been ten years since Nicolette Farrell left her rural hometown after her best friend, Corinne, disappeared from Cooley Ridge without a trace. Back again to tie up loose ends and care for her ailing father, Nic is soon plunged into a shocking drama that reawakens Corinne's case and breaks open old wounds long since stitched. The decade-old investigation focused on Nic, her brother Daniel, boyfriend Tyler, and Corinne's boyfriend Jackson. Since then, only Nic has left Cooley Ridge. Daniel and his wife, Laura, are expecting a baby; Jackson works at the town bar; and Tyler is dating Annaleise Carter, Nic's younger neighbor and the group's alibi the night Corinne disappeared. Then, within days of Nic's return, Annaleise goes missing. Told backwards-Day 15 to Day 1-from the time Annaleise goes missing, Nic works to unravel the truth about her younger neighbor's disappearance, revealing shocking truths about her friends, her family, and what really happened to Corinne that night ten years ago. Like nothing you've ever read before, All the Missing Girls delivers in all the right ways. With twists and turns that lead down dark alleys and dead ends, you may think you're walking a familiar path, but then Megan Miranda turns it all upside down and inside out and leaves us wondering just how far we would be willing to go to protect those we love.