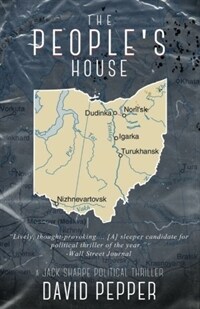 Can someone heist the majority of the House of Representatives with no one noticing? That’s the electoral coup that turns America upside down in THE PEOPLE'S HOUSE…

...Until one man notices.

Political reporter Jack Sharpe is logging time at the tail end of a disappointing career -- jaded about politics and stung by personal hard knocks. But after an odd election result in the Ohio Congressional district he covers, Sharpe stumbles across irregularities that spur him to dig deeper. The story takes him far beyond his corner of Ohio as he discovers an international plot—one that strikes at the heart of American democracy by taking advantage of weaknesses in today’s political architecture. His reporting leads to a showdown with the philandering Congressman and Presidential contender who knew about the plan but told nobody, and the eccentric but deadly Russian energy baron who masterminded it all. In order to save himself and the country, Sharpe must rekindle his old fire to navigate a treacherous journey through danger, betrayal, and atonement.

David Pepper serves as Chairman of the Ohio Democratic Party, and has been active in Ohio politics for 15 years. He was elected to the Cincinnati City Council and Hamilton County Board of Commissioners, and ran statewide campaigns for Ohio Attorney General and Auditor of State.

Prior to law school, David worked at the Center for Strategic and International Studies, living in Washington D.C. while spending much of his time in St. Petersburg, Russia.

David is married to Alana Pepper, who are the proud parents of Jack, 2.