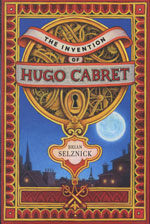 The Invention of Hugo Cabret (Hardcover)

Living in the walls of a busy Paris train station in 1931, clock keeper and orphan Hugo Cabret must constantly work to keep his secrets safe, but when an inquisitive girl and an old man who owns a toy store begin probing, he must do all he can to keep them at a safe distance. 150,000 first printing. $150,000 ad/promo.

Orphan, clock keeper, and thief, Hugo lives in the walls of a busy Paris train station, where his survival depends on secrets and anonymity. But when his world suddenly interlocks--like the gears of the clocks he keeps--with an eccentric, bookish girl and a bitter old man who runs a toy booth in the station, Hugo's undercover life and his most precious secret are put in jeopardy. A cryptic drawing, a treasured notebook, a stolen key, a mechanical man, and a hidden message from Hugo's dead father form the backbone of this intricate, tender, and spellbinding mystery.

When twelve-year-old Hugo, an orphan living and repairing clocks within the walls of a Paris train station in 1931, meets a mysterious toyseller and his goddaughter, his undercover life and his biggest secret are jeopardized.