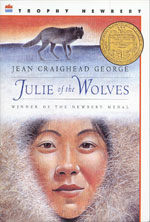 Julie of the Wolves (Paperback)

An Eskimo girl who becomes lost on the North Slope of Alaska is befriended by a pack of wolves.

The thrilling Newbery Medal&;winning classic about an Eskimo girl lost on the Alaskan tundra.&#160;This middle grade novel is an excellent choice for tween readers in grades 5 to 6, especially during homeschooling. It&;s a fun way to keep your child entertained and engaged while not in the classroom.

Julie of the Wolves is a staple in the canon of children&;s literature and the first in the Julie trilogy. The survival theme makes it a good pick for readers of wilderness adventures such as My Side of the Mountain, Hatchet, or Island of the Blue Dolphins.

This edition, perfect for classroom or home use, includes John Schoenherr&;s original scratchboard illustrations throughout, as well as bonus materials such as an introduction written by Jean Craighead George&;s children, the author&;s Newbery acceptance speech, selections from her field notebooks, a discussion guide, and a further reading guide.

To her small Eskimo village, she is known as Miyax; to her friend in San Francisco, she is Julie. When her life in the village becomes dangerous, Miyax runs away, only to find herself lost in the Alaskan wilderness.

Miyax tries to survive by copying the ways of a pack of wolves and soon grows to love her new wolf family. Life in the wilderness is a struggle, but when she finds her way back to civilization, Miyax is torn between her old and new lives. Is she Miyax of the Eskimos&;or Julie of the wolves?

Don't miss any of the books in Jean Craighead George's groundbreaking series: Julie of the Wolves, Julie, and Julie's Wolf Pack.

While running away from home and an unwanted marriage, a thirteen-year-old Eskimo girl becomes lost on the North Slope of Alaska and is befriended by a wolf pack.