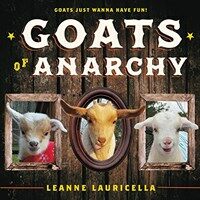 Goats of Anarchy: One Woman's Quest to Save the World One Goat at a Time (Hardcover)

Leanne Lauricella was living and working in New York City as an event planner at a job that she hated, and her life was filled with stress, drama, and chaos. The city frowns upon keeping farm animals in a 500-square-foot apartment so she had to wait until she got married and moved to New Jersey with her new Italian husband to get goats.In 2014, she brought home baby Jax and baby Opie. She was addicted immediately. They were funny, entertaining, and lovable, and she had to have more! Two months later she added Tig, Nero, and Otto to the crew. Leanne, who is vegan, was in love with all of them, and she wanted to share their individual personalities and funny antics with the rest of the world in hopes that people would start to view them as fun and lovable pets instead of food sources.At the time, Leanne was obsessed with the television series Sons of Anarchy, so she named all of her goats after characters in the show and started an Instagram account called Goats of Anarchy.In the book Goats of Anarchy, Leanne shares adorable photos of her goats accompanied by descriptions of their personalities and funny anecdotes about the antics of the group of goats in the farmyard.