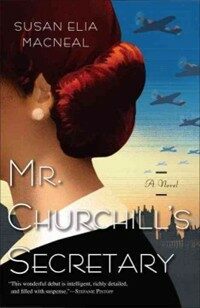 For fans of Jacqueline Winspear, Laurie R. King, and Anne Perry, Mr. Churchill&;s Secretary captures the drama of an era of unprecedented challenge&;and the greatness that rose to meet it.

London, 1940. Winston Churchill has just been sworn in, war rages across the Channel, and the threat of a Blitz looms larger by the day. But none of this deters Maggie Hope. She graduated at the top of her college class and possesses all the skills of the finest minds in British intelligence, but her gender qualifies her only to be the newest typist at No. 10 Downing Street. Her indefatigable spirit and remarkable gifts for codebreaking, though, rival those of even the highest men in government, and Maggie finds that working for the prime minister affords her a level of clearance she could never have imagined&;and opportunities she will not let pass. In troubled, deadly times, with air-raid sirens sending multitudes underground, access to the War Rooms also exposes Maggie to the machinations of a menacing faction determined to do whatever it takes to change the course of history.

Ensnared in a web of spies, murder, and intrigue, Maggie must work quickly to balance her duty to King and Country with her chances for survival. And when she unravels a mystery that points toward her own family&;s hidden secrets, she&;ll discover that her quick wits are all that stand between an assassin&;s murderous plan and Churchill himself.

In this daring debut, Susan Elia MacNeal blends meticulous research on the era, psychological insight into Winston Churchill, and the creation of a riveting main character, Maggie Hope, into a spectacularly crafted novel.

After German Luftwaffe bomb London, Maggie Hope--trained in math and code breaking, but only able to find a job as Winston Churchill's secretary--uses the unfettered access her position demands to try to unravel a plot to assassinate Churchill himself. A first novel. Original. 12,500 first printing.

After German Luftwaffe bomb London, Maggie Hope--trained in math and code breaking, but only able to find a job as Winston Churchill's secretary--uses the access her position demands to try to unravel an assassinate plot.