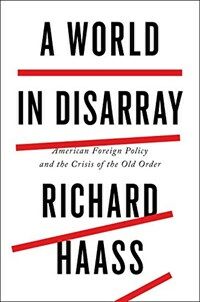 A World in Disarray: American Foreign Policy and the Crisis of the Old Order (Hardcover)

A visionary examination of the deteriorating ability of the U.S. and other global powers to shape the world in their image, and the end of the world order they sought, from the president of the Council on Foreign Relations ? Things fall apart; the center cannot hold. Not just a line from a Yeats poem, this is, argues Council on Foreign Relations president Richard Haass, an apt description of the current state of the world. A World in Disarray is his wise, historically grounded examination of the current world, how we got here, what will happen next, and what it will mean for us all. Great powers, particularly the United States, for long the dominant building blocks of international relations, are losing some and in certain cases much of their sway to other entities and forces. Disorder is on the rise. In fact, as Haass shows, America's leadership has at times made matters worse, both by trying to do too much and by increasingly failing to use the power it does have.? Adding to the problem is a decline in the ability of the country's elected representatives to agree on a consistent course of action or to ensure that the U.S. has the economic, human, military, and physical resources global leadership requires.? ? Meanwhile, power in all its forms is more distributed in more hands than at any time in history. The same holds for technology. ?Decision-making is ever more decentralized.? Globalization with its vast, fast flows of just about anything and everything across borders, is a reality that governments often cannot monitor, much less manage. World population, already above seven billion, is projected to rise to at least nine billion by mid-century. Climate change now outpaces the world's ability to stop or in some cases adapt to it. For its part, the United States remains the strongest country in the world, but its share of global power is shrinking, as is its ability to translate the considerable power it does have into influence. A World in Disarray traces the history of the rise of the modern state system through the end of the Cold War and illustrates how the past twenty-five years have seen a surprising unraveling of order in many domains, including but in no way limited to the Middle East. ? A World in Disarray offers much more than analysis, however. Haass argues the world needs an updated operating system--call it world order 2.0--that takes into account new forces, challenges, and non-state actors. One critical element of this adjustment, particularly for the United States, will be adopting a new approach to sovereignty, one that embraces its obligations and responsibilities as well as its rights and protections. Haass also details what the U.S. should do towards China and Russia, in Asia and the Middle East, and at home on behalf of its national security. Drawing on the author's own years of expertise as an analyst and official at the highest levels of government, A World in Disarray is a lucid and incisive analysis of our shifting landscape and the need for a new American foreign policy that reflects a twenty-first century world that in ways promises to be a departure from much that has come before.