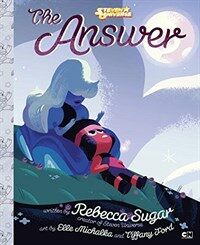 You already are the answer!

Thousands of years ago, there were two Gems called Ruby and Sapphire who lived on the faraway Gem Homeworld planet. Even though one Gem could see into the future, neither could predict that their paths would come together in such an incredible way! This is the story of Garnet, the leader of the Crystal Gems, and how she came to live on planet Earth. Rebecca Sugar, creator of Steven Universe, tells this love story with plenty of warmth and humor.