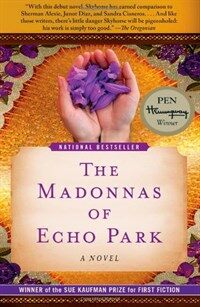 The Madonnas of Echo Park (Paperback)

We slipped into this country like thieves, onto the land that once was ours. With these words, spoken by an illegal Mexican day laborer, The Madonnas of Echo Park takes us into the unseen world of Los Angeles, following the men and women who cook the meals, clean the homes, and struggle to lose their ethnic identity in the pursuit of the American dream. When a dozen or so girls and mothers gather on an Echo Park street corner to act out a scene from a Madonna music video, they find themselves caught in the crossfire of a drive-by shooting. In the aftermath, Aurora Esperanza grows distant from her mother, Felicia, who as a housekeeper in the Hollywood Hills establishes a unique relationship with a detached housewife. The Esperanzas’ shifting lives connect with those of various members of their neighborhood. A day laborer trolls the streets for work with men half his age and witnesses a murder that pits his morality against his illegal status; a religious hypocrite gets her comeuppance when she meets the Virgin Mary at a bus stop on Sunset Boulevard; a typical bus route turns violent when cultures and egos collide in the night, with devastating results; and Aurora goes on a journey through her gentrified childhood neighborhood in a quest to discover her own history and her place in the land that all Mexican Americans dream of, "the land that belongs to us again."  Like the Academy Award–winning film Crash, The Madonnas of Echo Park follows the intersections of its characters and cultures in Los Angeles. In the footsteps of Junot Díaz and Sherman Alexie, Brando Skyhorse in his debut novel gives voice to one neighborhood in Los Angeles with an astonishing— and unforgettable—lyrical power.