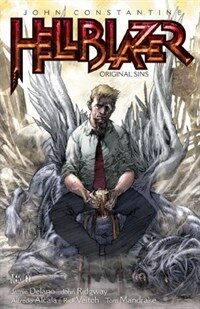 This first collection is a loosely connected series of tales of John’s early years where Constantine was at his best and at his worst, all at the same time.

"As one of the few magicians who understands both the possibilities and the dangers of his art, Liverpool native John Constantine has managed to keep himself from becoming lost in its dark power -- but he also cannot escape its seductive, addictive hold.Unfortunately, while Constantine may understand magic's true price, the world is full of amateurs willing to sign away their souls for a taste of it -- and like it or not, his hard-won knowledge guarantees that he'll always be in the middle of the mess that follows"--P. [4] of cover.

Sorcerer and occult detective John Constantine deals with a hunger spirit in New York City, a group of British yuppie demons, a tortured veteran and the ghosts of his unit in a small town, and an army from hell called the Damnation Army.