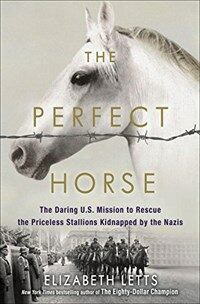 The Perfect Horse: The Daring U.S. Mission to Rescue the Priceless Stallions Kidnapped by the Nazis (Hardcover)

NEW YORK TIMES BESTSELLER • From the author of The Eighty-Dollar Champion, the remarkable story of the heroic rescue of priceless horses in the closing days of World War II

WINNER OF THE PEN AWARD FOR RESEARCH NONFICTION

In the chaotic last days of the war, a small troop of battle-weary American soldiers captures a German spy and makes an astonishing find—his briefcase is empty but for photos of beautiful white horses that have been stolen and kept on a secret farm behind enemy lines. Hitler has stockpiled the world’s finest purebreds in order to breed the perfect military machine—an equine master race. But with the starving Russian army closing in, the animals are in imminent danger of being slaughtered for food.

With only hours to spare, one of the U.S. Army’s last great cavalrymen, Colonel Hank Reed, makes a bold decision—with General George Patton’s blessing—to mount a covert rescue operation. Racing against time, Reed’s small but determined force of soldiers, aided by several turncoat Germans, steals across enemy lines in a last-ditch effort to save the horses.

Pulling together this multistranded story, Elizabeth Letts introduces us to an unforgettable cast of characters: Alois Podhajsky, director of the famed Spanish Riding School of Vienna, a former Olympic medalist who is forced to flee the bomb-ravaged Austrian capital with his entire stable in tow; Gustav Rau, Hitler’s imperious chief of horse breeding, a proponent of eugenics who dreams of genetically engineering the perfect warhorse for Germany; and Tom Stewart, a senator’s son who makes a daring moonlight ride on a white stallion to secure the farm’s surrender.

A compelling account for animal lovers and World War II buffs alike, The Perfect Horse tells for the first time the full story of these events. Elizabeth Letts’s exhilarating tale of behind-enemy-lines adventure, courage, and sacrifice brings to life one of the most inspiring chapters in the annals of human valor.

Praise for The Perfect Horse

“Winningly readable . . . Letts captures both the personalities and the stakes of this daring mission with such a sharp ear for drama that the whole second half of the book reads like a WWII thriller dreamed up by Alan Furst or Len Deighton. . . . The right director could make a Hollywood classic out of this fairy tale.”—The Christian Science Monitor

“Letts, a lifelong equestrienne, eloquently brings together the many facets of this unlikely, poignant story underscoring the love and respect of man for horses.”—Kirkus Reviews

3. In The Perfect Horse we see how ideas developed to improve animal breeding contributed to the pseudoscience of eugenics—an early 20th century movement to improve the human race that eventually contributed to the Nazi philosophy of racial purity. Are there any drawbacks to breeding purebred animals? What made people want to apply the theories of animal breeding to humans? Do you think this could ever happen again?

4. Several of the major players in this story had a connection to the Olympic Games. George Patton competed in 1912, Podhajsky in 1936. Reed was an alternate for the 1932 team. How did the Olympic experience shape these men and how did it influence their decisions during the war?

5. George Patton famously said that during peacetime, playing polo was the closest that an officer could get to real combat. Many of World War II’s most brilliant leaders were horsemen, and many believed that eliminating the training on horseback would be an irreparable loss to the Army. What was it about their devotion to horses that made them so successful in war? Does working with animals teach skills that are impossible to learn in any other way?

6. There were surprisingly few events during World War II in which men from opposing sides joined together in a common task. Why did the German horsemen risk treason to join with the Americans? What would have likely happened if the Germans had decided to stay put and wait for the end of the war? Given the circumstances, did everyone involved make the right decision?

7. Critics of Patton have said that he was more concerned about gathering up Lipizzaner horses than with saving human refugees and concentration camp survivors. Given the number of other atrocities going on in late April, 1945, was it worth the sacrifice of men and manpower to safeguard the horses?

8. The bravery and selflessness of Captain Tom Stewart, who followed orders to ride across enemy lines to negotiate the stud farm’s release, seems striking to a modern reader. As the son of a sitting senator, certainly he could have been spared being put into such a dangerous situation. What was it about Tom Stewart’s character that was exceptional? Were the morals and motivations of the World War II’s citizen soldiers different from the way people view their duty and honor today?

9. While the Lipizzaner were mostly returned to their native Austria, Witez was shipped to America, eventually sold off at auction, and never returned to his native Poland. The author, in her research, discovered that the Poles were actively trying to reclaim Witez before he was ever shipped to America, but the Americans were distrustful of the Poles and dismissed their claims to the horse. Should Witez have been returned to Poland or was his rightful place in America?

10. At Hank Reed’s funeral, more than twenty of the men who had served under him came to pay their respects. What was it about Hank Reed’s background, training, or education made his men so devoted to him.? What can we learn about leadership by looking at the lives of the men and women who were part of “The Greatest Generation?”