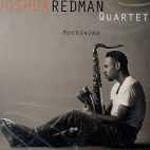 Composer Joshua Redman has led a wide range of adventurous combos, from the large-scale, classic repertoire-oriented SFJAZZ Collective to his funk-oriented trio, Elastic Band. In the new, collaborative quartet James Farm, the prodigious other members - pianist Aaron Parks, bassist Matt Penman, drummer Eric Harland - share equal billing with Redman. As he has explained,
"Everybody in this band is a composer and all the decisions are made collectively. The sound of the band, the direction that each performance takes, the set list; they're all determined equally by us as band members."

Though younger than Redman, his band mates boast equally impressive resumes, having played individually with such artists as Terence Blanchard, Dave Holland, Betty Carter, McCoy Tyner, Kurt Rosenwinkel, and Charles Lloyd, and are among the most in-demand players in jazz right now. Penman and Harland were part of the SFJAZZ Collective and both appeared on Parks' acclaimed 2007 Blue Note solo debut, Invisible Cinema, which caught the ear of Redman and in part led to the formation of this new group.