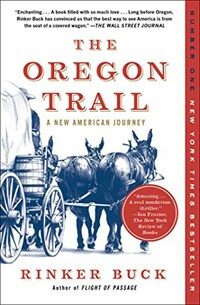 The #1 New York Times bestseller: Rinker Buck’s “awe-inspiring…charming, big-hearted, impassioned…fun to read” (The Boston Globe) account of traveling the length of the Oregon Trail the old-fashioned way?in a covered wagon with a team of mules.

Acclaimed in hardcover as “an incredible true story” (Entertainment Weekly), “a real nonfiction thriller” (Ian Frazier, New York Review of Books), and an “enchanting book filled with so much love” (Wall Street Journal) that “put me in mind of Bill Bryson’s comic tone in A Walk in the Woods” (Dwight Garner, The New York Times), Rinker Buck’s The Oregon Trail was a #1 New York Times bestseller, a #1 Indie Next Pick, and a Best of the Month selection of Powell’s, Apple, and Amazon.

Traveling from St. Joseph, Missouri, to Baker City, Oregon, over the course of four months, Buck is accompanied by three cantankerous mules, his boisterous brother, Nick, and a Jack Russell terrier named Olive Oyl. Along the way, they dodge thunderstorms in Nebraska, chase runaway mules across the Wyoming plains, cross the Rockies, and make desperate fifty-mile forced marches for water. The Buck brothers repair so many broken wheels and axels that they nearly reinvent the art of wagon travel itself. They also must reckon with the ghost of their father, an eccentric yet loveable dreamer whose memory inspired their journey across the plains and whose premature death, many years earlier, has haunted them both ever since.

The Oregon Trail is a majestic, uniquely American journey of a lifetime. Equal parts armchair adventure and moving history, “this tale of brotherhood, persistence, and daring so snares the emotions that it becomes a tear-jerker at its close” (Minneapolis Star Tribune) while also being “a laugh-out-loud masterpiece…and an unremitting delight” (Willamette Week).