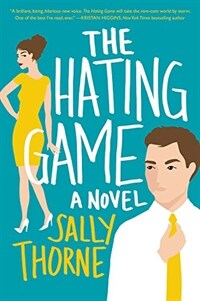 Soon to Be a Major Motion Picture!

Debut author Sally Thorne bursts on the scene with a hilarious and sexy workplace comedy all about that thin, fine line between hate and love.

Nemesis (n.) 1) An opponent or rival whom a person cannot best or overcome.

Lucy Hutton and Joshua Templeman hate each other. Not dislike. Not begrudgingly tolerate. Hate. And they have no problem displaying their feelings through a series of ritualistic passive aggressive maneuvers as they sit across from each other, executive assistants to co-CEOs of a publishing company. Lucy can&;t understand Joshua&;s joyless, uptight, meticulous approach to his job. Joshua is clearly baffled by Lucy&;s overly bright clothes, quirkiness, and Pollyanna attitude.

Now up for the same promotion, their battle of wills has come to a head and Lucy refuses to back down when their latest game could cost her her dream job&;But the&#160;tension between Lucy and Joshua has also reached its boiling point, and Lucy is discovering that maybe she doesn&;t hate Joshua. And maybe, he doesn&;t hate her either. Or maybe this is just another game.

Resolving to achieve professional success without compromising her ethics, Lucy embarks on a ruthless game of one-upmanship against cold and efficient nemesis Joshua, a rivalry that is impossibly complicated by her growing attraction to him. Original. A first novel. 100,000 first printing.

Lucy Hutton and Joshua Templeman are competitive rivals at a publishing company and profess to hate each other, but when the tension reaches the boiling point, they both wonder if the competition is just a game and that maybe they don't hate each other after all.