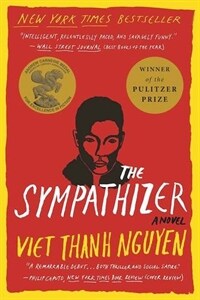 The Sympathizer: A Novel (Pulitzer Prize for Fiction) (Paperback)

One of 2015's most highly acclaimed debuts, The Sympathizer is a Vietnam War novel unlike any other. The narrator, one of the most arresting of recent fiction, is a man of two minds and divided loyalties, a half-French half-Vietnamese communist sleeper agent living in America after the end of the war.It is April 1975, and Saigon is in chaos. At his villa, a general of the South Vietnamese army is drinking whiskey and, with the help of his trusted captain, drawing up a list of those who will be given passage aboard the last flights out of the country. But, unbeknownst to the general, this captain is an undercover operative for the communists, who instruct him to add his own name to the list and accompany the general to America. As the general and his compatriots start a new life in Los Angeles, the captain continues to observe the group, sending coded letters to an old friend who is now a higher-up within the communist administration. Under suspicion, the captain is forced to contemplate terrible acts in order to remain undetected. And when he falls in love, he finds that his lofty ideals clash violently with his loyalties to the people close to him, a contradiction that may prove unresolvable.

Winner of the 2016 Pulitzer Prize for Fiction Winner of the 2016 Edgar Award for Best First Novel Winner of the 2016 Andrew Carnegie Medal for Excellence in Fiction "[A] remarkable debut novel"-Philip Caputo, New York Times Book Review (cover review) The winner of the 2016 Pulitzer Prize for Fiction, as well as seven other awards, The Sympathizer is the breakthrough novel of the year. With the pace and suspense of a thriller and prose that has been compared to Graham Greene and Saul Bellow, The Sympathizer is a sweeping epic of love and betrayal. The narrator, a communist double agent, is a "man of two minds," a half-French, half-Vietnamese army captain who arranges to come to America after the Fall of Saigon, and while building a new life with other Vietnamese refugees in Los Angeles is secretly reporting back to his communist superiors in Vietnam. The Sympathizer is a blistering exploration of identity and America, a gripping espionage novel, and a powerful story of love and friendship.