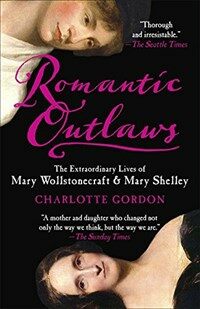 This groundbreaking dual biography brings to life a pioneering English feminist and the daughter she never knew. Mary Wollstonecraft and Mary Shelley have each been the subject of numerous biographies, yet no one has ever examined their lives in one book—until now. In Romantic Outlaws, Charlotte Gordon reunites the trailblazing author who wrote A Vindication of the Rights of Woman and the Romantic visionary who gave the world Frankenstein—two courageous women who should have shared their lives, but instead shared a powerful literary and feminist legacy.

In 1797, less than two weeks after giving birth to her second daughter, Mary Wollstonecraft died, and a remarkable life spent pushing against the boundaries of society’s expectations for women came to an end. But another was just beginning. Wollstonecraft’s daughter Mary was to follow a similarly audacious path. Both women had passionate relationships with several men, bore children out of wedlock, and chose to live in exile outside their native country. Each in her own time fought against the injustices women faced and wrote books that changed literary history.

The private lives of both Marys were nothing less than the stuff of great Romantic drama, providing fabulous material for Charlotte Gordon, an accomplished historian and a gifted storyteller. Taking readers on a vivid journey across revolutionary France and Victorian England, she seamlessly interweaves the lives of her two protagonists in alternating chapters, creating a book that reads like a richly textured historical novel. Gordon also paints unforgettable portraits of the men in their lives, including the mercurial genius Percy Shelley, the unbridled libertine Lord Byron, and the brilliant radical William Godwin.

“Brave, passionate, and visionary, they broke almost every rule there was to break,” Gordon writes of Wollstonecraft and Shelley. A truly revelatory biography, Romantic Outlaws reveals the defiant, creative lives of this daring mother-daughter pair who refused to be confined by the rigid conventions of their era.

“[An] impassioned dual biography . . . Gordon, alternating between the two chapter by chapter, binds their lives into a fascinating whole. She shows, in vivid detail, how mother influenced daughter, and how the daughter’s struggles mirrored the mother’s.”—The Boston Globe

"Mary Wollstonecraft (1759-1797) and her daughter Mary Shelley (1797-1851) have each been the subject of numerous biographies by top tier writers, yet no author has ever examined their lives in tandem. Perhaps this is because these two amazing women never knew each other--Wollstonecraft died of infection at the age of 38, a week after giving birth to her daughter. Nevertheless their lives were closely intertwined, their choices, dreams and tragedies so eerily similar, it seems impossible to consider one without the other: both became famous writers; both fell in love with brilliant but impossible authors; both were single mothers and had children out of wedlock (a shocking and self-destructive act in their day); both broke out of the rigid conventions oftheir era and lived in exile; and both played important roles in the Romantic era during which they lived. The lives of both Marys were nothing less than extraordinary, providing fabulous material for Charlotte Gordon, a gifted story teller. She seamlessly weaves their lives together in back and forth narratives, taking readers on a vivid journey across Revolutionary France and Victorian England, from the Italian seaports to the highlands of Scotland, in a book that reads like a richly textured historical novel"--