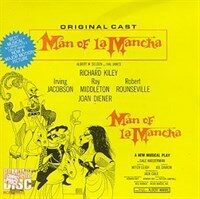 Man of La Mancha, the show that introduced "The Impossible Dream" to the world (and lounge singers everywhere), was the hit of the 1965 Broadway season. Richard Kiley is magnificent in his career-defining performance as the deluded wannabe knight Don Quixote. His leading lady Joan Diener sings the role of the kitchen wench Aldonza with just the right balance of dignity and vulgarity. Irving Jacobson turns in a fine comic performance as the Don's faithful squire, Sancho Panza. The score, with music by Mitch Leigh and lyrics by Joe Darion, was revolutionary in its time. The orchestra had no violins--just brass, woodwinds, percussion, and flamenco guitars. Man of La Mancha is one of Broadway's most inspiring musicals and it well deserves its high reputation. --Michael Simmons