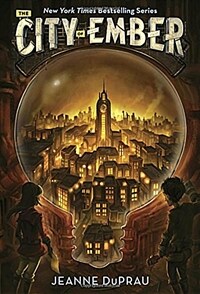 The City of Ember (Paperback)

In the year 241, twelve-year-old Lina finds part of an ancient message that she is sure holds a secret to save her underground city from ruin, but Lina and her friend Doon must decipher the message before the lights go out on Ember forever. Reprint.

Ember is the only light in a dark world. But when its lamps begin to flicker, two friends must race to escape the dark. This highly acclaimed adventure series is a modern-day classic&;with over 4 MILLION copies sold!&#160;
&#160;
The city of Ember was built as a last refuge for the human race. Two hundred years later, the great lamps that light the city are beginning to dim. When Lina finds part of an ancient message, she&;s sure it holds a secret that will save the city. Now, she and her friend Doon must race to figure out the clues to keep the lights on. If they succeed, they will have to convince everyone to follow them into danger. But if they fail? The lights will burn out and the darkness will close in forever.
&#160;
Nominated to 28 State Award Lists!
An American Library Association Notable Children&;s Book
A New York Public Library 100 Titles for Reading and Sharing Selection
A Kirkus Reviews Editors&; Choice
A Child Magazine Best Children&;s Book
A Mark Twain Award Winner
A William Allen White Children&;s Book Award Winner
&#160;
&;A realistic post-apocalyptic world. DuPrau&;s book leaves Doon and Lina on the verge of undiscovered country and&#160;readers wanting more.&; &;USA Today
&#160;
&;An&#160;electric debut.&; &;Publishers Weekly,&#160;Starred&#160;
&#160;
&;While Ember is colorless and dark, the book itself is&#160;rich with description.&; &;VOYA,&#160;Starred
&#160;
&;A harrowing journey into the unknown, and cryptic messages for readers to decipher.&; &;Kirkus Reviews,&#160;Starred

In the year 241, twelve-year-old Lina trades jobs on Assignment Day to be a Messenger to run to new places in her decaying but beloved city, perhaps even to glimpse Unknown Regions.