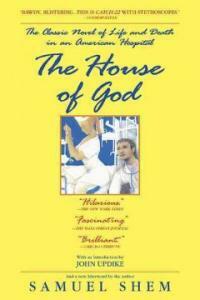 The House of God (Paperback, Reissue)

In a hilarious novel of the healing arts, six young interns, fresh out of medical school, struggle to survive, to stay sane and to love in their first year working in the high-intensity environment of a hospital. Reissue.

An intern becomes disillusioned with the medical establishment when he sees his fellow interns fall for the illusions that destroy a doctor's ability to relate to and really care for his patients.

By turns heartbreaking, hilarious, and utterly human, The House of God is a mesmerizing and provocative novel about what it really takes to become a doctor.

Struggling with grueling hours and sudden life-and-death responsibilities, Basch and his colleagues, under the leadership of their rule-breaking senior resident known only as the Fat Man, must learn not only how to be fine doctors but, eventually, good human beings.&#160;

A phenomenon ever since it was published, The House of God was the first unvarnished, unglorified, and uncensored portrait of what training to become a doctor is truly like, in all its terror, exhaustion and black comedy. With more than two million copies sold worldwide, it has been hailed as one of the most important medical novels ever written.

With an introduction by John Updike&#160;