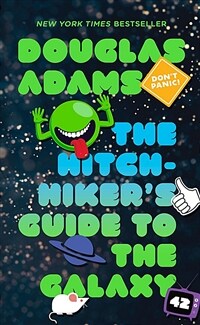 The Hitchhiker's Guide to the Galaxy (Mass Market Paperback)

SOON TO BE A HULU SERIES &;&#160;Now celebrating the pivotal 42nd&#160;anniversary of the original radio show on which the book was based.

Nominated as one of America&;s best-loved novels by PBS&;s&#160;The Great American Read

Seconds before Earth is demolished to make way for a galactic freeway, Arthur Dent is plucked off the planet by his friend Ford Prefect, a researcher for the revised edition of&#160;The Hitchhiker&;s Guide to the Galaxy&#160;who, for the last fifteen years, has been posing as an out-of-work actor.

Together, this dynamic pair began a journey through space aided by a galaxyful of fellow travelers: Zaphod Beeblebrox&;the two-headed, three-armed ex-hippie and totally out-to-lunch president of the galaxy; Trillian (formerly Tricia McMillan), Zaphod&;s girlfriend, whom Arthur tried to pick up at a cocktail party once upon a time zone; Marvin, a paranoid, brilliant, and chronically depressed robot; and Veet Voojagig, a former graduate student obsessed with the disappearance of all the ballpoint pens he&;s bought over the years.

Where are these pens? Why are we born? Why do we die? For all the answers, stick your thumb to the stars!

Praise for The Hitchhiker&;s Guide to the Galaxy

&;A whimsical oddyssey . . . Characters frolic through the galaxy with infectious joy.&;&;Publishers Weekly

Chronicles the journeys, notions, and acquaintances of reluctant galactic traveler Arthur Dent, accompanied by never-before-published material from the late author's archives as well as commentary by famous fans.