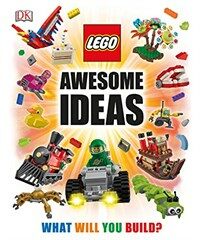 Explore an all-new ideas book that unlocks the secrets of LEGO® building and shows fans how to create a world with their imagination.

Explore each chapter as it steadily creates a themed world and ultimately showcases a dynamic diorama of the complete build, showing readers that they, too, can build an entire LEGO world from scratch—brick by brick, model by model.

With creative model ideas and visual tips and techniques, LEGO Awesome Ideas will inspire everyone from beginners to accomplished builders.

*This book is meant to inspire kids to imagine their own scenes using the LEGO bricks they may already have.