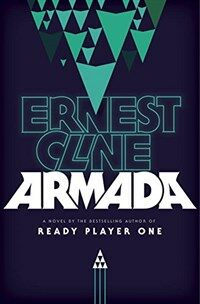 From the author of&#160;Ready Player One, a rollicking alien invasion thriller that embraces and subverts science-fiction conventions as only Ernest Cline can.&#160;

Zack Lightman has never much cared for reality. He vastly prefers the countless science-fiction movies, books, and videogames he's spent his life consuming. And too often, he catches himself wishing that some fantastic, impossible, world-altering event could arrive to whisk him off on a grand spacefaring adventure.&#160;

So when he sees the flying saucer, he's sure his years of escapism have finally tipped over into madness.&#160;

Especially because the alien ship he's staring at is straight out of his favorite videogame, a flight simulator callled&#160;Armada&;in which gamers just happen to be protecting Earth from alien invaders.&#160;

As impossible as it seems, what Zack's seeing is all too real. And it's just the first in a blur of revlations that will force him to question everything he thought he knew about Earth's history, its future, even his own life--and to play the hero for real, with humanity's life in the balance.&#160;

At once reinventing and paying homage to science-fiction classics,&#160;Armada&#160;is a rollicking, surprising thriller, a coming-of-age adventure, and an alien invasion tale like nothing you've ever read before.&#160;

&;Nerd-gasmic . . . another science fiction tale with a Comic-Con's worth of pop-culture shout-outs.&;&;Rolling Stone

&;An amazing novel [that] proves Cline has the ability to blend popular culture with exciting stories that appeal to everyone.&;&;Associated Press

Struggling to complete his final month of high school only to glimpse a UFO that exactly resembles an enemy ship from his favorite video game, Zack Lightman questions his sanity before becoming one of millions of gamers tasked with protecting the Earth during an alien invasion. By the best-selling author of Ready Player One.

"THE NEW NOVEL FROM THE BESTSELLING AUTHOR OF READY PLAYER ONE It's just another day of high school for Zack Lightman. He's daydreaming through another boring math class, with just one more month to go until graduation and freedom--if he can make it that long without getting suspended again. Then he glances out his classroom window and spots the flying saucer. At first, Zack thinks he's going crazy. A minute later, he's sure of it. Because the UFO he's staring at is straight out of the videogame he plays every night, a hugely popular online flight simulator called Armada--in which gamers just happen to be protecting the earth from alien invaders. But what Zack's seeing is all too real. And his skills--as well as those of millions of gamers across the world--are going to be needed to save the earth from what's about to befall it. Yet even as he and his new comrades scramble to prepare for the alien onslaught, Zack can't help thinking of all the science-fiction books, TV shows, and movies he grew up reading and watching, and wonder: Doesn't something about this scenario seem a little too... familiar? Armada is at once a rollicking, surprising thriller, a classic coming of age adventure, and an alien-invasion tale like nothing you've ever read before--one whose every page is infused with author Ernest Cline's trademark pop-culture savvy"--

Struggling to complete his final month of high school only to glimpse a UFO that exactly resembles an enemy ship from his favorite video game, Zack questions his sanity before becoming one of millions of gamers tasked with protecting the Earth during an alien invasion.