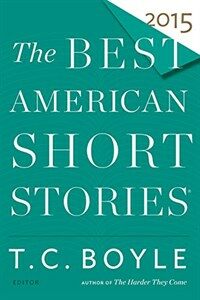 In his introduction to this one hundredth volume of the beloved&#160;Best American Short Stories,&#160;guest editor T. C. Boyle writes, &;The Model T gave way to the Model A and to the Ferrari and the Prius . . . modernism to postmodernism and post-postmodernism. We advance. We progress. We move on. But we are part of a tradition.&;

Boyle&;s choices of stories reflect a vibrant range of characters, from a numb wife who feels alive only in the presence of violence to a new widower coming to terms with his sudden&#160;freedom, from a missing child to a champion speedboat racer. These stories will grab hold and&#160;surprise, which according to Boyle is &;what the best fiction offers, and there was no shortage of&#160;such in this year&;s selections.&;

Mulling over the question of character likability, series editor Heidi Pitlor asks, &;Did I like these characters? I very much liked reading their stories, as did T. C. Boyle.&; Here are characters who &;are living, breathing people who screw up terribly and want and need and think uneasy thoughts.&; &#160;

HEIDI PITLOR, series editor, is a former senior editor at Houghton Mifflin Harcourt. She is the author of the novels&#160;The Birthdays&#160;and The Daylight Marriage.

The 100th installment of an annual anthology features a collection of short stories hand-picked by the acclaimed author of World's End and highlights work from today's best and newest fiction writers. Simultaneous.

Presents twenty of the best works of short fiction of the past year from a variety of acclaimed sources.