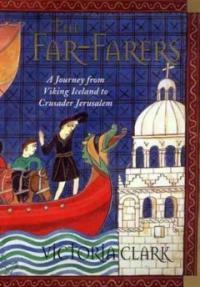 The Far-Farers: A Journey from Viking Iceland to Crusader Jerusalem (Hardcover)

Just before the year 1000 a young Viking named Thorvald the Far-farer turned his back on the pagan gods of his fathers to preach the Christian gospel. But his Icelandic countrymen mocked him as a homosexual, stoned him and finally outlawed him. Abandoning his homeland, Thorvald embarked on an epic journey to the golden heart of all medieval world maps - Jerusalem.A thousand years later, in the year 2000, Victoria Clark embarked on the same journey to discover to what extent the dramatic changes and conflicts sweeping western Europe a thousand years ago still resonate today. The Far-Farers is both the story of this twenty-first-century journey and a history of extraordinary eleventh-century western Christendom.In this book she gathers a group of influential eleventh-century characters. Viking Thorvald, emperors of East and West Christendom, abbots, saints, princesses, a robber Norman and Crusaders are personally or professionally connected one to another to form links in a historical chain extending down the century and all the way from Iceland to the Holy Land. Western Europe was struggling to unite in the eleventh century, expanding rapidly and changing utterly. Warfare, peacekeeping, multinational monasticism, institutional power struggles, mass pilgrim travel, and rising religious fundamentalism, were a few of its salient characteristics. In short, it was a world more like our own than we might imagine.The twenty-first-century people she encounters as she travels through Iceland, central and western Europe, the Balkans, Turkey and the Middle East cast fresh light on both worlds. A Swedish violinist she meets on a Turkish train reclaims the religion of his pagan Viking ancestors. In the ancient capital of Poland, a young Catholic priest scorns the idea of Europe uniting in the name of human rights instead of Christ. A Greek Jewess in Thessaloniki makes her peace with a thousand years of her people's persecution. At the Crusader stronghold of Krac des Chevaliers a Syrian playboy highlights the deep and widening gulf between the West and Islam.