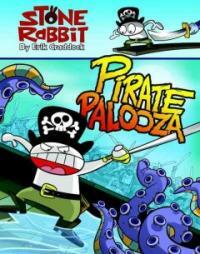 When his coffee table’s leg breaks, Stone Rabbit replaces it with the cursed peg leg of a long-dead pirate—and inadvertently unleashes the ghostly fury of Captain Barnacle Bob! Suddenly, our hero finds himself clashing cutlasses with salty specters and fleeing from scary sea beasts. Will Stone Rabbit escape with both of his long ears intact? Or will he end up as a squid’s snack?Pirate Palooza is the second book in a full-color series of riotous, riproaring graphic novels that chronicles the zany of adventures of a quicktempered and quick-witted young rabbit.Erik Craddock grew up during the ’80s and ’90s on a steady diet of comics, video games, and pop culture. It was during histime as a student at New York City’s School of Visual Arts that Stone Rabbit was born. He lives in Babylon, New York.