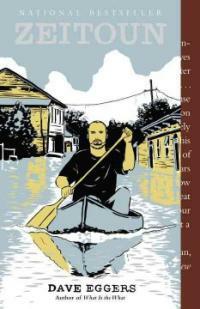 Documents the story of a long-time New Orleans resident who was forced to stay behind during Hurricane Katrina while the rest of his family evacuated, describing how he spent days after the storm traveling by canoe to feed abandoned animals before he was inexplicably arrested. Reprint.

The true story of one family, caught between America’s two biggest policy disasters: the war on terror and the response to Hurricane Katrina.

Abdulrahman and Kathy Zeitoun run a house-painting business in New Orleans. In August of 2005, as Hurricane Katrina approaches, Kathy evacuates with their four young children, leaving Zeitoun to watch over the business. In the days following the storm he travels the city by canoe, feeding abandoned animals and helping elderly neighbors. Then, on September 6th, police officers armed with M-16s arrest Zeitoun in his home. Told with eloquence and compassion, Zeitoun is a riveting account of one family’s unthinkable struggle with forces beyond wind and water.

Describes how Abdulrahman Zeitoun remained in New Orleans during Hurricane Katrina, his subsequent efforts to help other victims, his disappearance a week later, and the effect of these events on his wife Kathy and their children.