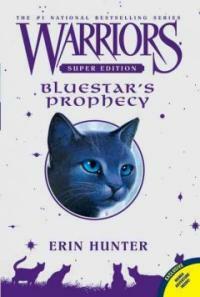 Warriors Super Edition: Bluestar&;s Prophecy is an epic stand-alone adventure in Erin Hunter&;s #1 nationally bestselling Warriors series! In this Super Edition, discover the secrets behind legendary ThunderClan leader Bluestar&;s rise to power, before the events of Warriors #1: Into the Wild.

Bluestar has been prophesied to guide ThunderClan through a time of great turmoil. But dangerous secrets from her past haunt her every paw step&;shadowy whispers that may destroy her . . . and her Clan.

Bluestar, a warrior of ThunderClan, struggles under the weight of a prophecy that promises her glory as Clan leader, but also spells out her ultimate demise.