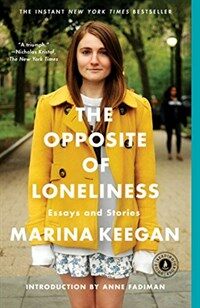 The Opposite of Loneliness: Essays and Stories (Paperback)

The instant New York Times bestseller and publishing phenomenon: Marina Keegan’s posthumous collection of award-winning essays and stories “sparkles with talent, humanity, and youth” (O, The Oprah Magazine).Marina Keegan’s star was on the rise when she graduated magna cum laude from Yale in May 2012. She had a play that was to be produced at the New York Fringe Festival and a job waiting for her at The New Yorker. Tragically, five days after graduation, Marina died in a car crash. Marina left behind a rich, deeply expansive trove of writing that, like her title essay, captures the hope, uncertainty, and possibility of her generation. Her short story “Cold Pastoral” was published on NewYorker.com. Her essay “Even Artichokes Have Doubts” was excerpted in the Financial Times, and her book was the focus of a Nicholas Kristof column in The New York Times. Millions of her contemporaries have responded to her work on social media. As Marina wrote: “We can still do anything. We can change our minds. We can start over…We’re so young. We can’t, we MUST not lose this sense of possibility because in the end, it’s all we have.” The Opposite of Loneliness is an unforgettable collection of Marina’s essays and stories that articulates the universal struggle all of us face as we figure out what we aspire to be and how we can harness our talents to impact the world. “How do you mourn the loss of a fiery talent that was barely a tendril before it was snuffed out? Answer: Read this book. A clear-eyed observer of human nature, Keegan could take a clever idea...and make it something beautiful” (People).