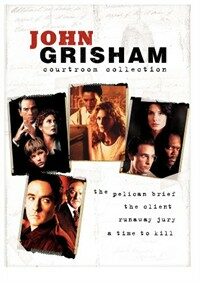 THE PELICAN BRIEF Who killed two Supreme Court judges? A clever law student (Julia Roberts) may know, an investigative reporter (Denzel Washington) wants her story ? and everyone else wants them dead. THE CLIENT A U.S. Attorney (Tommy Lee Jones) out for a conviction and a rookie lawyer (Susan Sarandon) out of her league clash over a boy who holds a secret…and who knows the mob will kill him if he talks. A TIME TO KILL Tensions explode into a fury of activism, Klan terror and a stirring fight for justice when a murder trial ignites racial animosities in a small town. Sandra Bullock, Samuel L. Jackson, Matthew McConaughey and Kevin Spacey star. RUNAWAY JURY A jury of upright citizens…or is one member available to the highest bidder? Gene Hackman, Dustin Hoffman, John Cusack and Rachel Weisz star as a gunmaker goes on trial and the backroom maneuvering goes into high gear.