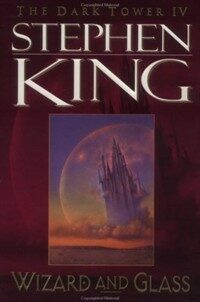 The past year was a stellar one for Stephen King, thanks to the phenomenal success of his serial novel in Signet paperback, The Green Mile, as well as the hardcover publication of Desperation and The Regulators (by Richard Bachman). Now, Stephen King invites readers back into the world of Roland the Gunslinger, in this, the eagerly anticipated fourth volume in his epic series of horror and fantasy. Wizard and Glass picks up where the last book left off, with our hero, Roland, and his unlikely band of followers escaping from one world and slipping into the next. And it is there that Roland tells them a story, one that details his discovery of something even more elusive than the Dark Tower: love. But his romance with the beautiful and quixotic Susan Delgado also has its dangers, as her world is torn apart by war. Here is Roland's journey to his own past, to a time when valuable lessons awaited him, lessons of loyalty and betrayal, love and loss. As he did in the first three volumes in the Dark Tower series, The Gunslinger, The Drawing of the Three, and The Waste Lands, Stephen King displays his marvelous talent for storytelling. Wizard and Glass is Stephen King at his very best.