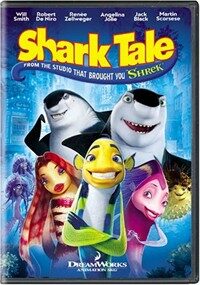 A comic catch from the studio that brought you Shrek, Shark Tale is a hilarious hit and "a wonderful under-the-sea adventure for movie lovers of all ages!" (Clay Smith, Access Hollywood)

Oscar (Will Smith), a lowly tongue-scrubber at the local Whale Wash, becomes an improbable hero when he tells a great white lie. To keep his secret, Oscar teams up with an outcast vegetarian shark, Lenny (Jack Black), and the two become the most unlikely of friends. When his lie begins to unravel, it’s up to Oscar’s loyal friend Angie (Renee Zellweger) and Lenny to help him stand up to the most feared shark in the water (Robert De Niro) and find his true place in the reef.