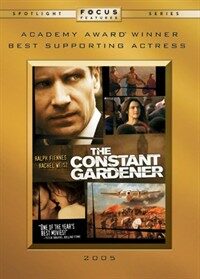 Nominated for four Academy Awards, The Constant Gardener stars Ralph Fiennes and Academy Award winner for Best Supporting Actress Rachel Weisz. In this gripping suspense-thriller, a diplomat on the hunt for his wife's murderer uncovers a treacherous conspiracy that will destroy millions of innocent people - unless he can reveal its sinister roots. From the best-selling spy novel by John le Carre comes this edge-of-your-seat story of murder, deception and revenge that critics are calling " a hair-raising thriller with an unforgettable finale" (Karen Durbin, Elle).