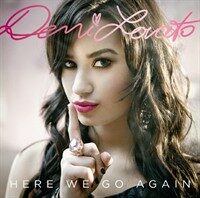 2009 sophomore album from the teen Pop sensation and star of Disney's Camp Rock and Sonny With A Chance. Demi's debut album, Don't Forget, sold half a million copies and she performed for over one million people as special guest on the Jonas Brothers' 2009 sold out Burning Up tour. Here We Go Again, her eagerly awaited album, contains two bonus tracks: 'Gift Of A Friend' and 'So Far So Good' (from Sonny With A Chance).