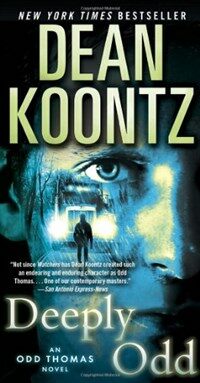 NEW YORK TIMES BESTSELLER The pistol appeared in his hand the way a dove appears in the hand of a good magician, as if it materialized out of thin air. "You think I won't do it right here in the open. But you'd be surprised. . . . You'll drop before you get the breath to scream."

The truck driver is decked out like a rhinestone cowboy, only instead of a guitar he's slinging a gun--and Odd Thomas is on the wrong end of the barrel. Though he narrowly dodges a bullet, Odd can't outrun the shocking vision burned into his mind . . . or the destiny that will drive him into a harrowing showdown with absolute evil. DEEPLY ODD

How do you make sure a crime that hasn't happened yet, never does? That's the critical question facing Odd Thomas, the young man with a unique ability to commune with restless spirits and help them find justice and peace. But this time, it's the living who desperately need Odd on their side. Three helpless innocents will be brutally executed unless Odd can intervene in time. Who the potential victims are and where they can be found remain a mystery. The only thing Odd knows for sure is who the killer will be: the homicidal stranger who tried to shoot him dead in a small-town parking lot. With the ghost of Alfred Hitchcock riding shotgun and a network of unlikely allies providing help along the way, Odd embarks on an interstate game of cat and mouse with his sinister quarry. He will soon learn that his adversary possesses abilities that may surpass his own and operates in service to infinitely more formidable foes, with murder a mere prelude to much deeper designs. Traveling across a landscape haunted by portents of impending catastrophe, Odd will do what he must and go where his path leads him, drawing ever closer to the dark heart of his long journey--and, perhaps, to the bright light beyond. Praise for Deeply Odd and Dean Koontz's Odd Thomas series

"Not since Watchers has Dean Koontz created such an endearing and enduring character as Odd Thomas. . . . One of our contemporary masters."--San Antonio Express-News

" A] popular series . . . Koontz asks real questions about the nature of good and evil."--The New York Times Book Review "Odd evokes the homespun wisdom of Forrest Gump amid the mind-spinning adventures of a Jack Bauer. . . . The ultimate Everyman . . . an avatar of hope and honor and courage for all of us--the linchpin of a rollicking good tale."--BookPage

"There's never anything predictable about an Odd Thomas adventure. Another satisfying entry in this wildly popular series. It's Koontz, and it's Odd. Class dismissed."--Booklist