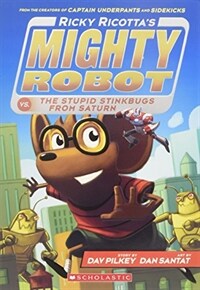 From Dav Pilkey, creator of Captain Underpants, and acclaimed artist Dan Santat, a thrilling friendship adventure with all-new full-color illustrations and mini-comics throughout!
Ricky Ricotta and his Mighty Robot are in another stinky situation!

Ricky's family is headed to Cousin Lucy's house for lunch -- how boring! Ricky and his Robot are hoping to have a little fun with Lucy's pet Jurassic Jackrabbits, but when they get there, Lucy makes them play princess with her instead! What could be worse?

An invasion of Stupid Stinkbugs from Saturn, that's what! Smelly Sergeant Stinkbug has arrived on Earth with a plan to kidnap its ruler, and Princess Lucy fits the bill. Now it's up to Ricky and his Mighty Robot to plug their noses and send those stinkers back into space!

Ricky Ricotta, his Mighty Robot, cousin Lucy, and some friends set out to save mousekind from Stupid Stinkbugs from Saturn, with a little help from some special gum and taffy.

Ricky Ricotta and his Mighty Robot battle for the safety of the solar system once again, this time, smelly Sergeant Stinkbug arrives on Earth with a plan to kidnap the king of the world but ends up with Ricky's little cousin Lucy instead and it's up to Ricky and his Robot to save Lucy and the rest of mousekind from a stinky situation! Simultaneous.